Gabriel Stoltz, right, with his boss Rowan Murray. Murray said he was “blown away” by Stoltz’s actions.

When Gabriel Stoltz saw someone in a high-visibility vest hanging off the driver’s side of a car, he did a double take.
The West Auckland HydroVac truck driver had been on a job in south Auckland when he heard sirens and pulled over to get out of the way.
Stoltz said he looked in the mirror and saw a white car with a green high-vis vest hanging off the driver’s side door.

When he looked again, he realised the moving fluorescent object was in fact a police officer being dragged down the road.

READ MORE:
* Seriously injured man pulled from car seconds before explosion
* Police officer hit and sent flying by fleeing vehicle in Auckland
* Cop lay for an hour next to hypothermic man in daring water rescue
Stoltz said the young female driver of the fleeing white car was doing at least 50km/h and showed no intention of slowing down. 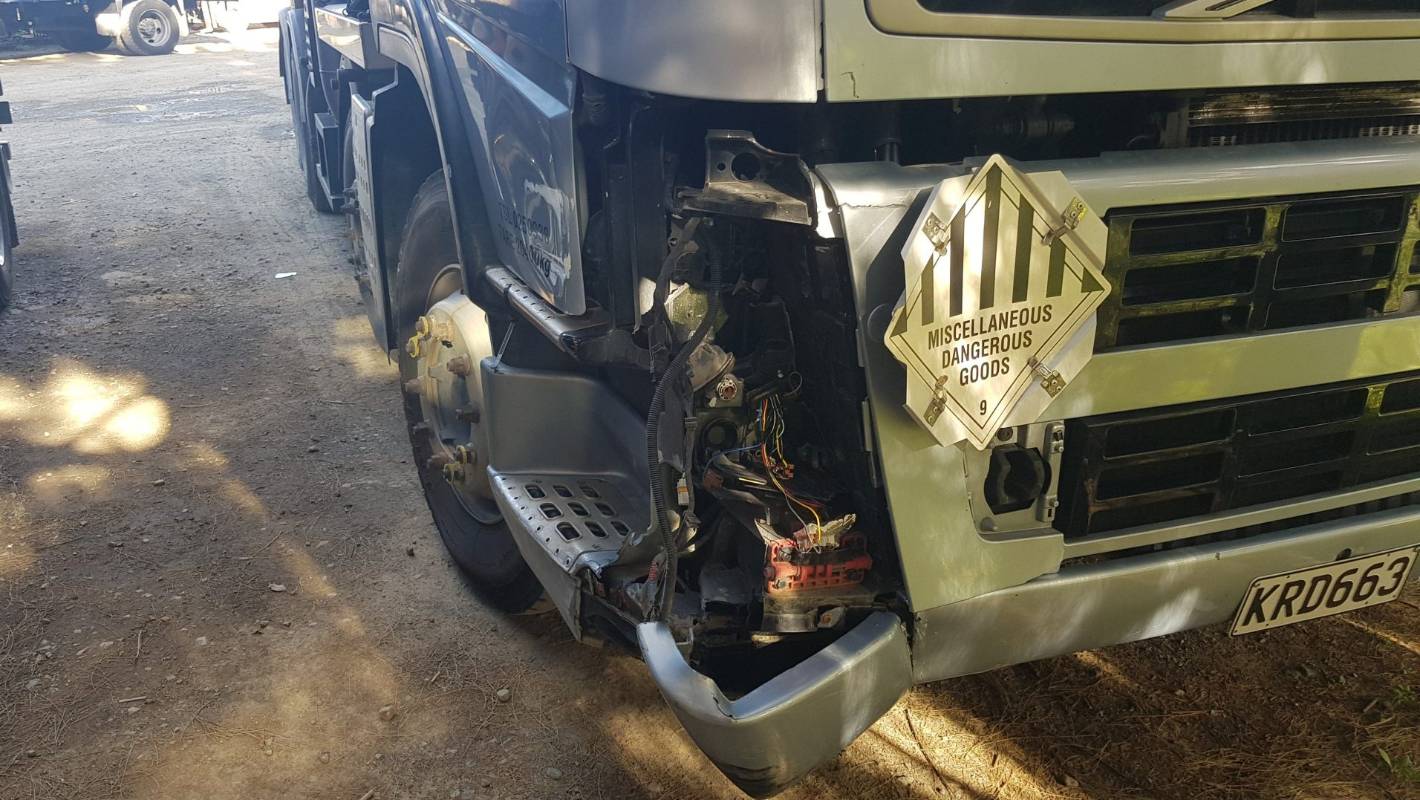 Damage to the truck, including time off the road, is estimated to be about $12,000.

“I just thought, ‘I’ve got to do something here because that cop has a family to go home to … I’ve got to do something, otherwise he’s going to die’.
“So I just pulled my truck in front of [the driver], then she stopped. The police officer dropped to the ground then [the driver] tried to come past me and the curb.
“She hit the truck, then hit the curb, then came to a stop about 50m on the other side of the traffic lights.”

The officer, who appeared to have been dragged by the car as the driver allegedly fled a police stop, survived. But Stoltz, a South African migrant, began to fear the consequences of his actions.
He thought he was going to be “locked up” for causing a crash or that he’d be fired for damaging his work truck.
Instead, he was acknowledged with an award for bravery at the Auckland District Police Awards.
Police said Stoltz’s actions were an exceptional example of members of the public doing what they could to keep the community safe.
The former railway worker said the award came as a surprise but he felt proud, particularly when he heard his children say they were living with a “hero in the house”.
“The main thing in my heart is that I’d done something good. That was good enough for me,” Stoltz said.
HydroVac field operations manager Rowan Murray was full of praise for his employee.
“When I heard what he’d done, I was quite blown away,” he said.
“Gab is the only person I know who has actually done something, actually stepped up and made a difference.”
“[We] are all very proud of having someone like in our staff.”
A police spokesman said the officer involved in the incident received minor injuries and was “understandably shaken” as a result.
“He was supported by fellow police staff following the incident and is back at work.”
The 15-year-old driver was before the Youth Court.