This is the 4th train derailment in northern Ontario this year

Ad : Playback will start after this advertisement
RAW: Train derails near Gogama, Ont.

CN said its crew reported the derailment to emergency services at about 2:45 a.m. ET Saturday. Police said the train was 30 to 40 cars in length and 10 cars went off the track four kilometres northwest of Gogama, Ont. There were no reports of injuries.

Some of the rail cars that caught fire entered the Mattagami River System, CN and police said.

The cause of the derailment is still under investigation and the Ministry of Environment has been notified.

CN Rail said in a statement that there is no evidence so far that either the water or air quality near the site have been affected. 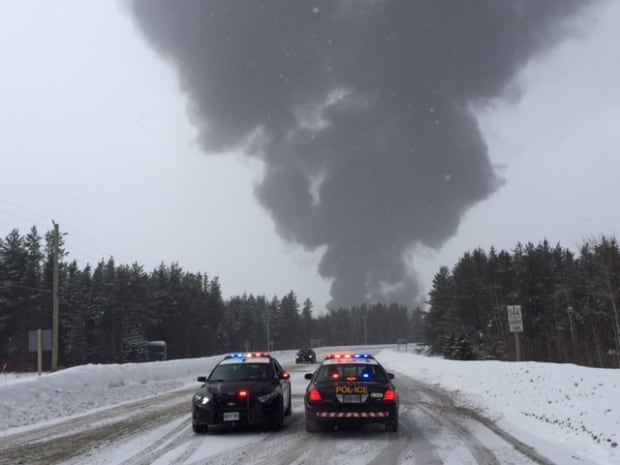 A large cloud of smoke from the fire billowed into the sky on Saturday. (Erik White/CBC)

The CN statement said emergency crews are conducting a full-site assessment and activating the emergency response plan with local officials. Booms have been deployed into the river to try to contain any spilled oil.

CN vice-president Jim Vena apologized for the disruption caused by the derailment.

Derailment not far from inn

The owner of the Gogama Village Inn said she is thankful the winds are blowing in a different direction, but feared smoke from the fire could force the town to be evacuated.

Roxanne Veronneau said the site of the derailment is approximately two kilometres from her Inn.

“I look out my window here at the Inn and all I see is the smoke in the distance. I could see it at 4 a.m. It makes you feel rather uncomfortable,” she said.

“Hopefully there is not going to be a next time and that our town will be safe. But when you see like, 100 cars, I don’t know, 70 cars of crude oil coming right down the middle of your town, the thought crosses your mind when you see what’s happened in Quebec.”

Veronneau said her inn was already full of workers who were dealing with the cleanup of the derailment that happened last month.

“Once again the town is crawling with transports and machinery trying to get it under control.” 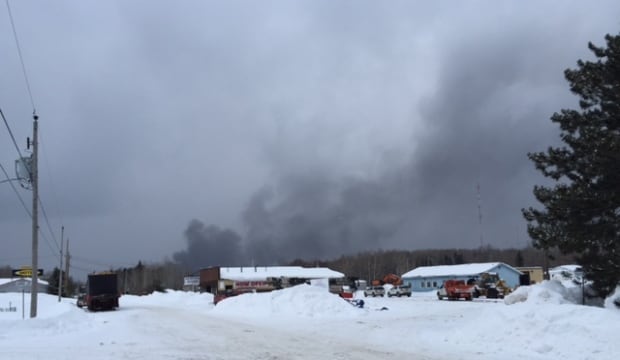 Smoke from the fire caused by the train derailment rises near Gogoma, Ont. (Erik White/CBC)

The town has come together to help, said Veronneau. She said she’s been coordinating to get anything workers need.

“One guy went and brought life jackets and paddles,” she said. “He came back to get ice augers, our snow machines. We are helping, doing whatever it takes to get this under control.”

It was the third CN oil train derailment in northern Ontario in less than a month — and the second in the same area.

The incident renews concerns about the safety of shipping crude oil by train and suggests that new safety requirements for tank cars carrying flammable liquids are inadequate. CN said the cars had been retrofitted with protective shields to meet a higher safety standard known as the 1232.

The new standard was enacted in Canada after a fiery derailment of a Montreal, Maine & Atlantic oil train derailment in July 2013 in the centre of Lac-Megantic, Que., killed 47 people, but oil trains meeting the new standard continue to derail and catch fire throughout North America.

NDP MPP for the region, France Gélinas, said she was travelling to the site after speaking to members of the local services board and residents of Gogama.

“They are courageous and scared,” Gélinas said. “This is the second derailment near their town and this one is very close. People can take pictures of the black smoke from their homes.”

Natalie Gaudette with the local services board said there is no immediate danger to residents and CN officials are on site doing air quality tests.

Highway 144 at Highway 661 at the Watershed is closed, as is Highway 101 at Highway 144. There is access to communities north of Gogama by way of the Cache.

This is the fourth CN Rail derailment in northern Ontario this year.

A train derailed last month, spilling crude oil and forcing the closure of the rail line.

Recent derailments in Canada and the U.S. have heightened public concern about the increasing number of oil shipments by rail.

On Thursday in the U.S. state of Illinois, 21 of 105 cars on a BNSF Railway oil train derailed in an area where the Galena River meets the Mississippi. BNSF said a resulting fire spread to five rail cars.

No injuries were reported in the derailment outside the town of Galena, but several small fires were still burning Saturday. The BNSF train also had been retrofitted with protective shields to meet the higher 1232 safety standard.

The U.S. and Canada are trying to co-ordinate on even newer tank car standards. U.S. Transportation Secretary Anthony Foxx met with safety officials in Canada in December to discuss the issue but neither country has yet settled on a new tank car design, though the U.S. is getting closer.

With files from The Associated PressReport Typo
Source:
http://www.cbc.ca/beta/news/canada/sudbury/train-carrying-crude-oil-derails-near-gogama-ont-1.2985703
Share This
Previous Article

Member of the Month for February is Shelly Gillies!