The importance of greasing your boom turret and tips on how to do it!

Home » Posts » The importance of greasing your boom turret and tips on how to do it!

The importance of greasing your boom turret and tips on how to do it!

In my 20 some years in this industry, I’m still amazed to find so many people and companies do not grease or have a maintenance plan for their boom turret – the worm and ring gear assembly at the top of the tank.

By not properly doing this simple maintenance procedure can cost you thousands of dollars!

Most manufacturers have decals on the truck and/or it’s listed in their preventative maintenance schedules in the unit’s owner manual. I’ve seen some that indicate 18 to 20 pumps weekly is good, but what some of the manufacturers don’t tell you is that the boom should be in motion while the greasing is being done.

Greasing your boom while still cradled on the truck only allows the grease to get to one section of the ring/worm gear. Therefore, when you take the boom out of its cradle and it’s rotated around the truck, the grease is only spread in a small section and not completely lubricating both the entire ring and worm gear assembly. Anybody that does it this way will eventually see problems within a few years potentially causing them to replace ring or worm gear components. This damage could easily cost upwards of $3,000 or $4,000 for each affected truck in your fleet.

So, if you want to save some money, this is how I do it to ensure maximum life out of the turret assembly components.

To start, take the boom out of its cradle and position it in the air safely away from all overhead obstructions. Have it suspended in the air just beside the truck nearest its normal racked position. With the help of a coworker, begin greasing the turret via the supplied grease points (if equipped) while the boom is in a horizontal rotating motion around the truck. Continue greasing and rotating until the boom reaches the opposite side of the truck. This will ensure the grease is applied evenly across the entire ring/worm gear assembly for maximum protection.

Here are some examples of boom turrets that have not seen proper greasing procedures: 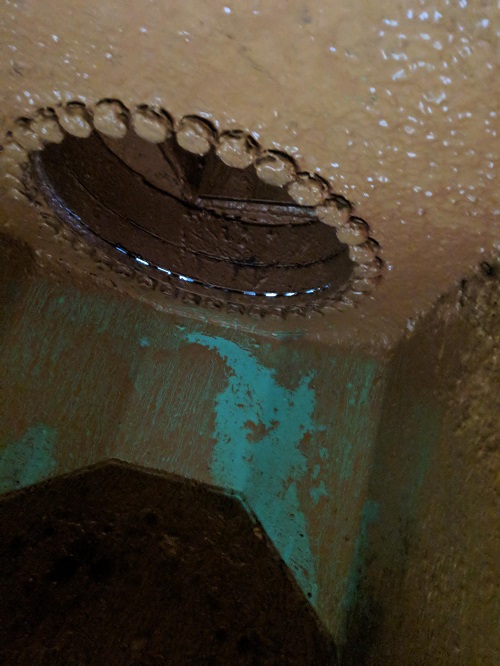 As you can see, the light is visible through the ring gear where it mates to the top of the vacuum tank. This is caused from lack of grease as well as neglecting to check the mounting bolts on a regular basis.

When the damage has progressed this far, you will experience a loss of suction that you will actually be able to hear! This is caused by the air being drawn into the tank from around your rock-head creating a whistling sound. Ring/worm gear replacement parts will be needed at this point.

In this picture below, the boom is actually resting on top and gouging the tank. Another example of lack of proper greasing over time that could easily be prevented. The ring gear and the seals between it and the tank flange are so worn out that the entire boom assembly is now resting on the tank.  At this point it’s already too late and you will be faced with a hefty repair bill to replace the entire assembly. 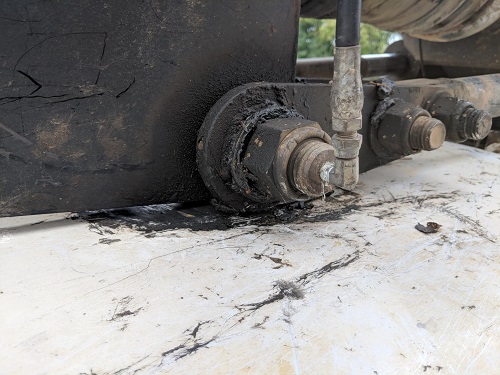 Other telltale signs that there is a lack of grease is when you hear a growling or grinding sound coming from the turret when uncradling your boom, it needs grease asap. While working in winter conditions/freezing temperatures and your boom will not move smoothly on the horizontal plane, this could not only mean a lack of grease. What happens is the condensation is created within the tank at night when we park our units. It creates moisture between the ring gear plates and tank flange that will literally freeze your boom in place where it rests while you drive to site. You may have seen people use hot water around their boom turret to get it moving freely again. Or they might work it back and forth until it starts to work freely again. These are sure signs of a potential lack of grease. The barrier the grease creates between the seals and tank flange can help prevent that condensation from freezing.

With most of the scenarios that I’ve pointed out the severe damage has already occurred and greasing is almost worthless because it will only fill the spaces already grooved within your ring/worm gear assemblies. When you pressurize your system, it will literally suck the new grease right out of the turret and into your tank!

Replacing the parts as soon as possible and keeping them operational by implementing a simple greasing schedule in your maintenance program will give a peace of mind that your equipment is being taken care of properly. And keeping a proper amount of suction while in work mode will help prevent overworking your Positive Displacement Blowers, thus keeping money in your pocket!

Don’t let a poor maintenance program suck up your profits. By doing simple routine maintenance and paying attention to your equipment is always affordable. Not doing so is costly.

If you have an idea for Terry’s Tips or a topic that you would like covered, feel free to contact me at info@hydrovacnation.ca. We always love positive feedback!

Thank you for reading and stay tuned for the next Terry’s Tips.

Tanks and dig on!