Pacific Gas and Electric Co. adequately marked its underground infrastructure at the site of a gas explosion that burned five buildings and sent people running for their lives in San Francisco’s Jordan Park neighborhood, the company said Thursday.

A PG&E locator responded to the site near Geary Boulevard and Parker Avenue on Jan. 28 and properly marked the utility’s underground lines there, capturing the work with photography, according to PG&E spokeswoman Andrea Menniti.

California law gives PG&E two days to respond to excavators’ requests to locate and mark its underground pipelines, unless the two parties mutually agree on a different timeline. PG&E’s locating and marking practices are currently under heavy scrutiny after a California Public Utilities Commission staff investigation concluded the utility repeatedly falsifiedinternal records about its responses to excavators’ requests.

But the utility’s statement Thursday sought to dispel any connection between that regulatory issue and the recent explosion, which occurred after construction workers for MasTec, a Florida company hired by Verizon, hit a gas main the day before while digging to install fiber-optic cables. No one was injured in the blast. 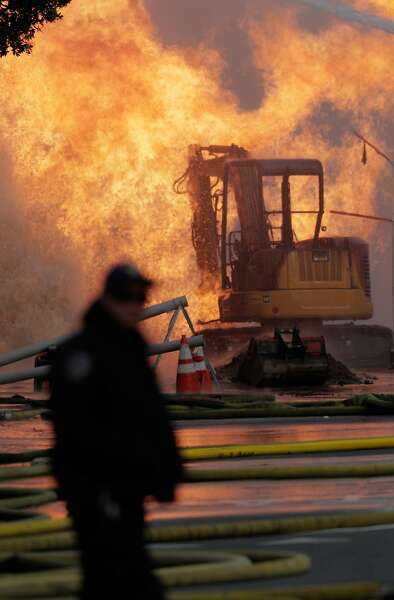 PG&E’s comments instead raised questions about whether MasTec and its subcontractors were following proper procedures. MasTec was also connected to a 2012 gas line explosion in New York, records show.

State law requires contractors to hand-dig within 24 inches of a gas line, and contracted workers may have come into contact with the line in question while using heavy equipment, Menniti said. But she stressed the incident is still being investigated, including by the National Transportation Safety Board and the state Public Utilities Commission.

In a statement Thursday, MasTec named two subcontractors it said were involved in the work, Advanced Fiber Works Inc. and Kilford Engineering Inc. The Chronicle could not reach representatives of either firm for comment.

“We continue to fully support the work of the authorities as they carry out the investigation,” said John Higgins, a MasTec executive, in a statement. “MasTec has deployed a fully staffed response team to address the important needs of those in the immediate vicinity of the incident with temporary housing, food and other necessities.”

The incident could have been far worse, said Mark McDonald, a natural gas explosions expert with NatGas Consulting in Boston. He was critical of PG&E’s response to the explosion, particularly the fact that flames shot out of the ground for more than two hours before utility crews shut off a gas valve to stop it.

“They’re lucky no one was killed. Thankfully, no one was seriously injured,” McDonald said. “But the risk and the hazard to first responders — I can’t say that strong enough. They should not be out there fighting and dealing with a fire that’s three stories tall engulfing four or five different buildings when the gas company should have the ability to control their leaking gas.” 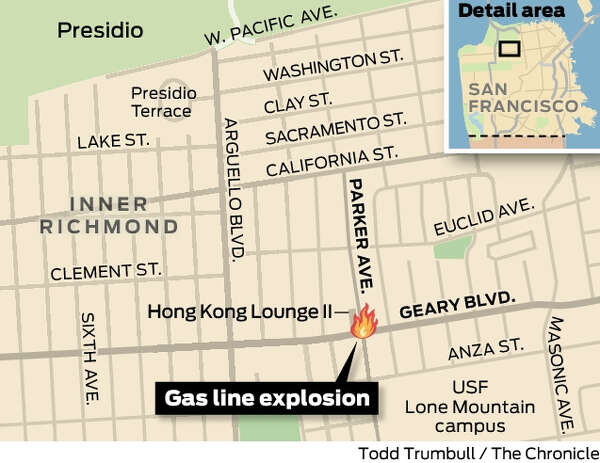 The 4-inch gas line where the explosion occurred is among numerous distribution lines in the city that can’t be shut off remotely or automatically,according to PG&E. Unlike the larger, higher-pressure transmission lines — the kind of infrastructure implicated in the deadly 2010 San Bruno pipeline explosion — PG&E’s lower-pressure distribution lines have to be turned off manually, Menniti said.

But gas companies should be able to shut off the gas within minutes of arriving on scene, McDonald said.

PG&E “did not have that access or ability, and that’s their fault,” he said.

Federal regulations require distribution pipelines to have valves that can control the flow of gas during an emergency, McDonald said. The regulations also require the valves to be easily accessible in an emergency and checked and serviced at least once each calendar year.

But gas companies are allowed to decide how far apart to space those valves, which can hamper the response to an emergency, he said.

As of Thursday morning electricity had been restored to all 2,500 people who lost power, PG&E said. Gas was restored to the line at about 4 p.m., and PG&E said it was making about 34 gas service representatives available until all customers had their service restored. PG&E representatives or qualified professionals have to restore service for safety purposes, the company said.

The federal Pipeline and Hazardous Safety Materials Administration had been evaluating the situation, but it is now deferring to the National Transportation Safety Board, which said Thursday it was sending a team of investigators to the scene, the agency said Thursday. 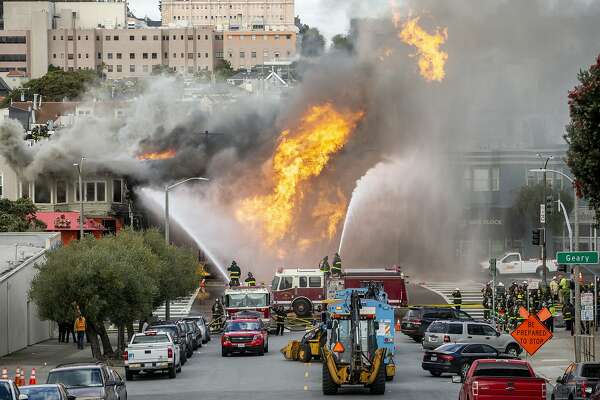 Charcoal still covered the streets, hours after the fire had been extinguished. There were remnants of yellow police tape streaming from hydrants and streetlight poles.

A mix of residential and commercial buildings were affected by the blaze, including Hong Kong Lounge II, which was shuttered due to damage from the fire.

A woman who identified herself only by her last name, Kwong, said Wednesday that she was the owner of the property that housed the dim sum restaurant and two residences on a higher floor.

“The restaurant would have been so busy, because it’s just the second day of the Lunar New Year,” Kwong said. “They’ll probably have to tear it down. I think we’ll try to rebuild.”

Workers sipped on coffee and stood near nine PG&E trucks that were parked by the Mel’s Drive-In on Beaumont Avenue and Geary. Rosie LaVere was walking her dog, Plaza, a day after the blaze. She surveyed the charred building that once housed Hong Kong Lounge II.

“The restaurant was a major part of the neighborhood,” LaVere said.

Irina Galafutnik, who was standing near the barricades and police tape, was at work at a nearby dental practice when the blaze occurred.

“It was the first time in my life I saw such a terrible fire,” Galafutnik said, shaking her head.

Showdown between Flint's mayor and city council over hydrovac