No more ‘cheat sheets’: Electronic logs for truckers mandatory by 2020

No more ‘cheat sheets’: Electronic logs for truckers mandatory by 2020

Truckers are known for their colourful slang, and it’s no different for the paper logbooks they often use to keep track of their time on the road.

“A lot of them call it the ‘cheat sheet,'” says Ron Arsenault, a truck driver for SLH Transport who’s based in Moncton.

That’s about to change.

The federal government has announced it will require all commercial truck and bus drivers in Canada to install electronic logging devices in their vehicles by the year 2020.

Each day, truckers fill out log sheets like this that mark how long they’ve spent driving and resting. (Blair Sanderson/CBC)

Under Canadian regulations, truckers are allowed to be behind the wheel for no more 13 hours per day to limit driver fatigue.

But Arseault says drivers, especially for smaller companies, are often under pressure to meet deadlines and will fudge the logbooks. “There’s been a lot of stuff like that.”

‘No way to cheat’

He believes automated electronic logs will make the roads safer.

“It will because there’s no way to cheat on it, everything is basically written in stone, your driving time, your on-duty time, your off-duty time, it’s right there on the computer.” 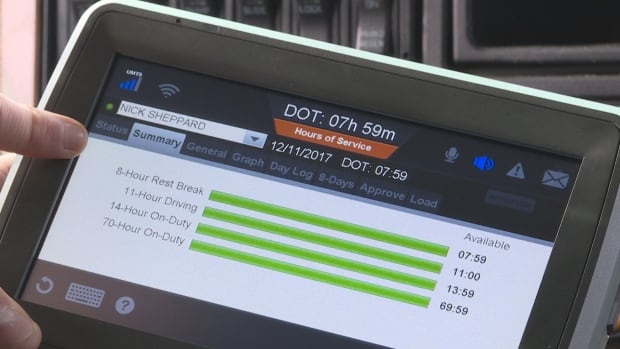 The electronic devices will allow the drivers to know how much time they legally have at the wheel before taking a break. (Steve Bruce/CBC)

Electronic logging devices, or ELDs, are already mandatory for Canadian drivers crossing the border to the United States because that country has required the use of the technology since December 2017.

The Canadian government decided to follow suit, giving truckers and commercial bus drivers until 2020 to have the technology in place.

Many truckers are eager to make the switch. 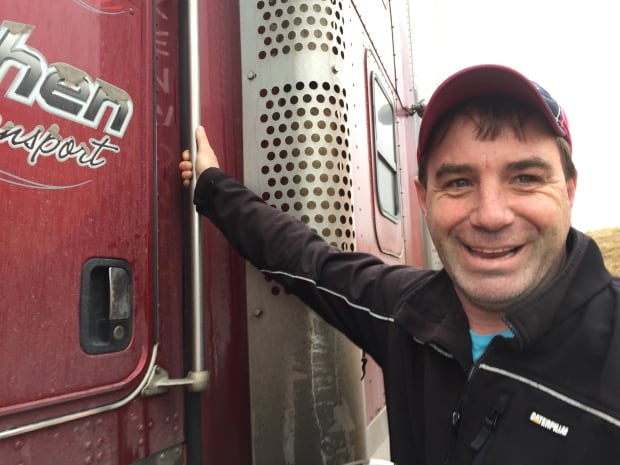 Driver Mark Duncan says electronic logs will remove the quandary some drivers face over whether to make deadlines or follow the rules around driving times. (Blair Sanderson/CBC)

Mark Duncan, who runs a regular route between Toronto and the Maritimes, says drivers won’t be able to break the rules, meaning they can’t be pressured by their employer.

“It’s going to be good for the drivers. We’re going to have lots of rest now.”

But while the move to electronic logging devices hits the fast lane, another measure that would reduce driver fatigue has stalled, says Marco Beghetto, a spokesperson for the Canadian Trucking Alliance.

He says his organization was anticipating mandatory sleep apnea testing, which was a proposal that was moving forward in the United States under the Obama administration, but scrapped by President Donald Trump. 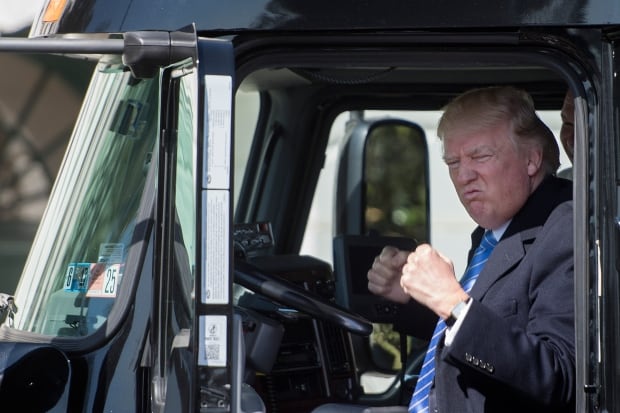 “We were ready to react if Transport Canada would begin working on a similar rule,” says Beghetto.

But because Canadian regulators tend to follow the Americans, “right now, that’s sort of on the back burner,” he says.

Lack of progress in that area is disappointing, says Dr. Glen Sullivan of the Atlantic Sleep Centre at the Saint John Regional Hospital.

Sleep apnea drastically reduces sleep quality which leads to fatigue and is likely more prevalent among long-haul truckers because of their diet and relatively sedentary lifestyle, he says.

“It is certainly a risk factor,” says Sullivan.

Some Canadian trucking companies are moving ahead anyway and offering sleep apnea testing for their drivers. In some cases, they are even paying for machines that help treat the condition.

But for now, those measures are voluntary with no regulations in sight anywhere down the road.

Duncan says he’s aware of the sleep apnea problem. “It’s in the magazines, the trucking magazines.”

But right now, the focus in the industry is the 2020 deadline for the installation of electronic logging devices, he says.