One Knickrehm Elementary fifth-grader hopes to educate people on the importance of calling 811 prior to digging through his award-winning poster.

Fifth-grader Leonidas Lopez placed first in the Nebraska 811: Call Before You Dig statewide poster campaign. On his poster, he drew the 811 logo, a person digging, a pirate and a cellphone calling 811. 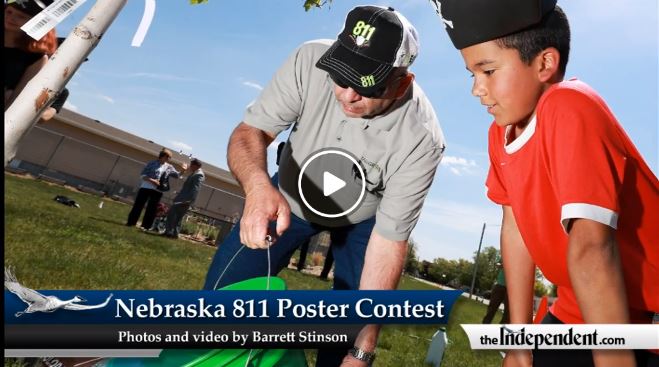 Leonidas said it took him a few weeks to complete his poster. “I went in in the mornings to work on it and I took it home, too,” he said. “I did a lot of research on Nebraska 811 and I was able to find some more ideas.”

Jill Geyer, damage prevention liaison with Nebraska 811, presented a plaque, bench and a tree to Knickrehm in recognition of the fifth-grader’s winning poster. His class will also receive a cookie party. Mayor Roger Steele attended Wednesday’s award presentation and thanked him for making Grand Island safer through his poster efforts. “The poster you created — it is a wonderful poster — will be displayed at the State Capitol,” Steele said. “It is always important to remember that there are things buried underground. If you dig, and you are not aware that they (lines) are there, they can hurt you. I am proud to be here at Knickrehm Elementary School. It is a great day for Grand Island that you all participated in that project.”

After delivering his remarks, the mayor put the first shovelful of dirt into the hole to plant the tree before the Knickrehm fifth-graders each took turns filling the hole with dirt. Geyer said the main message she wanted the students to learn is to call 811 before they dig to avoid hitting and damaging underground lines. She added there are a number of colored flags stuck in the ground around town that indicate where underground lines are to inform people prior to digging.

Grand Island Fire Chief Cory Schmidt told those in attendance that the Fire Department often gets calls from people who hit an underground line due to failing to call 811 prior to digging. People can face large fines if they damage an underground line. Geyer said that in December 2018, Nebraska 811 encouraged all Nebraska elementary-school students to watch an eight-minute video on the importance of underground utility lines and the dangers of unsafe digging practices. The video shows a pirate who is digging for treasure without calling 811 first.

The Knickrehm fifth-graders wore pirate hats at Wednesday’s award presentation. In addition to Wednesday’s award ceremony, Geyer said, Leonidas and other winners were invited on April 8 to the State Capitol, where they were honored. A proclamation was issued by Lt. Gov. Mike Foley honoring them for their award-winning posters.  Nebraska 811 will include the winning posters in its various promotions, including newsletters, websites, social media and billboards across the state.