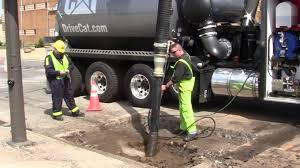 Weaver believes he made a persuasive argument.

“He really explained it very clearly. He had several pipes to not only explain but to show.  And sometimes, visuals are everything.”